After an overnight passage from Bintulu on the west coast of Sarawak our 48 foot aluminium catamaran Candeux arrives at Kuching.  It is a big city and the river reflects this, with lots of ships, large and small, and numerous commercial and residential building along the river front. The marina is nine nautical miles up-stream.  When we finally arrive it is obvious that it is falling apart.  We can see only two lonely yachts berthed side by side and they appear to be joined by an umbilical of covers. 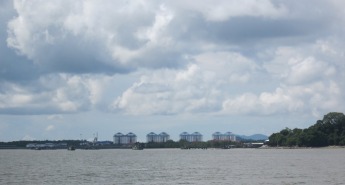 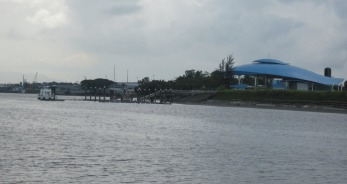 The entrance to the unkempt Kuching marina

We are soon tied up and shortly after meet Pierre and Evelyn, who have emerged from the two yachts.  We naturally decide that we need to celebrate our new landfall and meeting other sailors, so the beer and nuts duly emerge.  Pierre and Evelyn’s boats are side by side because they are two individuals travelling as a pair.  Evelyn has been sailing single-handed for many years since a young girl.  She seems to have little but her boat.  She takes a fatalistic and optimistic view of the value and importance of people living in harmony with the planet.  Evelyn is convinced that people have the power to make their own way and the wind takes you on its journey.  Hmmmm.  Pierre has a similar world view but with an easy-going pragmatism and sense of humour.

They are good company and it’s a big night on Candeux with lots Australian wine.  Duncan is enthusiastic in showing his generosity to our French guests, and to himself.  Conversation about boats flows liberally, as does wine.  Duncan begins to turn to philosophy and where the winds of the world will take us.  His vision includes the overarching role of computers and technology.  Sensing Evelyn’s resistance to this, Duncan bravely attempts to enlighten Evelyn to what he believes to be a realistic understanding of the future world where everything will be run by machines and computers, and we will all be freed from drudgery.  Hugh is not convinced that, whether this is true or not, there is any wisdom – or even possibility – of bringing Evelyn to Duncan’s vision and its global consequences.  Still, (not surprisingly) Duncan perseveres: dog with a bone.  Remarkably, Evelyn (a long-time sailing free-spirit), who is probably (at this very moment) encountering the (however civilized) global enemy, is resisting Duncan’s arguments fairly politely.  However, they both have their passions up. Hugh frankly thinks that, if there were no witnesses, Evelyn would demonstrate the improvising and imaginative power of people over machines, by smashing Duncan over the head with a wine bottle.  Violence does not ensue, but time does.

Evelyn and Pierre eventually depart and, rather surprisingly, Evelyn goes to the bow of Candeux to get off. This is a two metre drop to the concrete pontoon. Evelyn is so not 18 any more. We suggest that the aft steps are often used but Pierre, showing more loyalty than sense, says that Evelyn knows her way around boats.  Well maybe.  But Hugh thinks that Evelyn and Pierre are now so desperate to escape the clash of world visions that a two-metre drop from the bow seems like a good idea and, short of swimming, is the quickest route back to their boats.  They leap to freedom.  Dull thuds follow, but no screams of pain. The French are tough or, like us, are more than a bit buoyed by alcohol.

With the departure of Evelyn and Pierre, the Candeux Three turn their thoughts to their much-delayed dinner. Duncan, having already given our guests a good serve, decides to relax on the saloon settee while Hugh and Ben dish-up dinner.  He seems to have been much influenced by the spirit of Evelyn (or perhaps the spirit that comes in bottles?)  and perhaps even more than we had realized because he appears to have adopted Evelyn’s slightly incoherent style of speaking (her excuse is she’s French…..). Ben and Hugh decide to leave him to his semi-somnambulant musings while they get on with dinner.

Suddenly, apropos of nothing, Duncan improvises from a sitting start an impression of demonic possession (has Evelyn returned?) as first he smashes the table with his forehead then throws his not inconsiderable torso horizontally backwards and immediately tries to leap to his feet, apparently to flee, only to be halted by the very substantial dinette table returning him to a sitting position.  It’s impressive, if a bit odd.

He rests his head on the table, with a glass of wine still ready to hand. The strain of bringing the recalcitrant free-spirit sailors to heel, plus the gymnastics, seems to have taken its toll on him.   Hugh and Ben are stunned but, as Duncan has subsided, we return to dinner preparations and tidying up after all the social frivolity.

Next minute, Duncan apparently has a nightmare.  (This probably involves Evelyn turning into a computer virus and causing Duncan’s automated world to collapse.)  In nightmarish shock, Duncan throws up his hands in horror.  Unfortunately, the wine glass (full) is all too close and red wine and broken glass are flung around the boat (floor and settee).  Sacre bleu!  Ben and Hugh go into overdrive to sort this out, but Duncan seems like a man possessed as he staggers about the boat under the apparent onslaught of virus Evelyn.  But Duncan is not yet defeated and he manages a contortionist’s leap from the saloon down to the galley.  This does not go as well as might be hoped and Duncan ends up in a bit of a jumble of the floor, wine, glass and Duncan all over the place.  It’s pretty bloody untidy.  It appears that Evelyn did manage to smash that bottle of wine over Duncan’s head after all: we just didn’t notice at the time.

Earlier in the evening there were promises to share info and contacts, but we never see them again. Their boats are 50 feet away.  Hugh thinks they were mortally wounded by their precipitous leap off Candeux the previous evening and are unable to call for help.  Either that or they hate us and are terrified of another encounter with Duncan.  Still, we did mean well, but well, we are all just a bit different.  Vive la difference – perhaps.

The largely-uninhabited Kuching marina. Elevyn and Pierre’s boats off to the right.