Having left Bintulu on the west coast of Malaysian Borneo, skipper Ben and crew members Hugh and Duncan are in the process of sailing Candeux, Ben’s new 48 foot Mumby catamaran, on a 200nm overnight passage to Kuching on the SW tip of the island.

We have so far survived river run-outs, errant log attacks and threaded our way between numerous sea oil and gas exploration/extraction rigs.

It is now late afternoon, early evening.   We are starting to get ourselves and the boat ready for our first overnight passage on Candeux when, only just visible in the fading light, Hugh spots a red flag (no lights) ahead in the water.  Our previous experiences suggests we could be near a fishing a net.  Hugh gets the binoculars and scans the sea for a counterpart flag marking the other end of the net.  Normally (in Philippine waters further north) these dual flags mark the ends of a net stretched between them, or alternatively a flagged net running to a fishing boat itself.  Hugh just spots the second flag about 500m distant well to starboard.  The boat to which this belongs is well down to port and somewhat behind us.  This adds to the confusion because it is not clear whether the net is between the flags and/or linked to the mother-ship.  Suddenly we spot a few small white buoys floating on the water.  These are directly in front of our boat, but being white (and only the size of a large mango) are almost invisible in the sea.  Hugh quickly reverses Candeux to keep us in safe water until we can understand what we are seeing in the fading light.  Now we know what we are looking for, we can see that the line of intermittent small white buoys actually runs from the very distant red flag to the equally distant fishing boat.  This is over ¾ nm.  We have no choice but to go down to the fishing boat to go around the net.  Taking this route will however, allow us to engage the fishermen and to ensure that we can safely cross.  We wave, they wave.   All is well.  This could have turned out badly. If we had crossed the net we could have destroyed it (best case) and also had it wrapped around our propellers with the rudders (again) exploding their blocks, plus we could have aroused a boatload of angry fishermen with night upon us (worst case).  Small things can escalate into big things pretty quickly.

This style of marking for fishing activity is new to us, particularly in what is a regular commercial seaway.  But as the night goes on we see that it is not that uncommon. So we are kept pretty busy zig zagging our way towards Kuching.

It is not long before it is fully dark and we begin our night watches. These will have two of us awake at all times with each person doing six hours on and three hours off.  This will work fine, albeit that no one is going to get much sleep.  The advantage of this is that each watch will have one person at the helm at all times, while the other is available to attend to other tasks and each can watch over the other (hate to lose someone at sea) plus there is that extra set of eyes to watch for fishers and their nets and other boats.

Duncan and Hugh go below to get lifejackets and tethers.  However Ben is making no move to put on his safety gear.  Now, not everybody has the same ideas on safety, but Duncan and Hugh consider it as standard that lifejackets are worn at night and anyone on deck is tethered to the boat (there is just so much that can go wrong, and it is so much harder to right it safely at night) and the behavior of any individual directly affects everyone.  Duncan says to Ben, You need to put on your lifejacket. Ben replies, You can wear them if you want but I’m not going to. I know where they are if I need one. There is a long pause, with Duncan glaring at Ben’s back as the skipper busies himself with other things in the cabin. This is one of the defining moments in crew relations and, depending on how events unfold over the journey ahead, could fatefully determine the success or otherwise of the adventure. At this point Duncan’s Army training kicks in. The gist of the less than diplomatic tirade that follows is that Duncan doesn’t give a rats whether Ben likes wearing a lifejacket or whether he believes he can handle anything.  We are all in this together and if something happens to Ben, then Duncan and Hugh would have to bear that burden of not looking after their fellow sailor for the rest of their lives.  Reluctantly Ben retrieves his lifejacket and Duncan’s mood seems somewhat altered as he perhaps reflects on the current skipper/crew dynamics.  Still, with safety matters resolved for now, we settle in for the night.

Our chart plotters are our key guide at night but we also quickly attempt to locate our position via expected lights on land (we are not far off the coast).  Oddly, we can see starboard lateral marks inshore, but not the expected more prominent lighthouse.  This is not very encouraging.  Still, with several chart plotters on board, and them all largely in agreement, we do know where we are.  The real challenge is other vessels and their lights, or lack of them.  We spot several more fishing vessels with their deployed red flags with lights (this time).  Fortunately, having seen this fishing rig in daylight, we are comfortable in avoiding them.

The presence of larger ships is both more and less worrying, and it’s not long before we find ourselves running parallel with, and a bit faster than, a tug towing a large barge.  We can also see a fishing boat up ahead.  We adjust our course to avoid the fishing vessel and its presumed, but not visible, nets.  Suddenly we hear an AIS alert for a Dangerous Target (a ship on a potential collision course with us).  The chart plotters seemed to indicate that the Dangerous Target is quite close.  This captures our attention.  Our first thought is that our change of course has concerned the tug, which has turned on its AIS transmitter and is, in fact, our Dangerous Target.  However when we interrogate the AIS system, we realise that the AIS ship is travelling at 9.5 knots, which the tug certainly is not.  We then spot the real Dangerous Target quite some way astern.   We can see its red port light and two steaming lights, the forward one lower than the aft light.  Whoops.  And here she comes.  It’s interesting and worrying just how fast a ship can travel, and how misleading distances can be at night.  Still, we now know what we were looking at, and where. 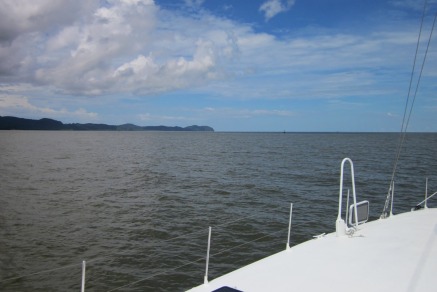 On the busy Sarawak River

Plenty of ship activity on the Sarawak River 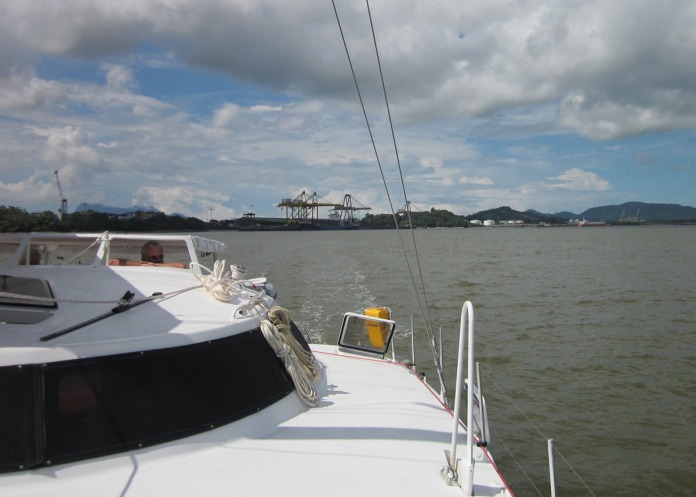 Motoring the nine miles up the Sarawak River to Kuching

There’s every reason to be extra cautious at night and we watch the freighter carefully.  Hugh observes to Ben that if we can see its port light it will continue to cross from behind to our starboard side.  Equally, as long as the distance between its forward and aft steaming lights continues to widen, there is no risk of collision.  However, Hugh (ever prone to consider the worst case, what if scenario) points out that his analysis is all well and good for now, but the size of ship and its speed makes it a coastal freighter and, oddly, on its current track it is heading away from the coast.  Hmmmmm.  Hugh also reflects that, given the fairly shallow depths, the deeper channels could well be determining the navigation of more deep-keeled vessels. Further, the presence of coastal ports on our port side, could suggest that there is a real possibility that this erstwhile ‘Dangerous Target’ could cease to be erstwhile and become actual.  The skipper is not concerned.   Hugh suspects that the skipper thinks that Hugh is occasionally a bit of a worrier.  Maybe, but…….  Oh dear.  Ben. The gap between the freighter’s forward and aft steaming lights was widening…..and now it’s narrowing.  By Hugh’s calculation this means its turning to port, towards us.  This is not good says Hugh.  Oh, oh.  Is that a green starboard navigation light now visible on the Dangerous Target with the port light also visible?  Oh great, it has now turned directly towards us.  Yes, it is a coastal freighter going to the coast, and we are between the ship and its destination – as predicted. And it is so very actual.

The question now is not is it heading our way? but, have they seen us? (big metal ship, small yacht), and will they crush us like an inconsequential can of imploding baked beans? or, marginally better, pass terrifying close to our stern or bow? ageing the aged critically closer to the grave?  However, we are fortunate.  The ship is well skippered.  As we watch with concentration, it clearly avoids the towing tug, skirts around the almost invisible fishing nets to our starboard, and gives us a wide berth so we don’t have kittens on the way to Kuching (a name which means cat in Malay).

The entrance to the unkempt Kuching marina

One thought on “Episode 18. Fishing nets and night lights – Bintulu to Kuching part 2”