The third member of Candeux’s crew, Duncan, has arrived from Newcastle (Australia) via Brunei. This is Duncan’s first day of sailing on Candeux, so we are looking at a fun day with hopefully a secure and interesting anchorage.

We depart Labuan at 0530hrs for the river entrance at Tanjung Baram (the Baram River), which is 90nm to the southwest.  We have no information on this anchorage but, from the charts, the bar looks like it has enough depth and there is deeper, protected water within.  As a catamaran which draws only 0.6 metres, we can access protected anchorages which would be denied to keel boats.  Or so we believe.  ETA 1800hrs.

We make our way south down the fairway out of Labuan Harbour.  There is no vessel traffic although there are lots of anchored ships and oil industry tenders.  We have both engines on and with a light breeze are doing eight knots. Excellent. 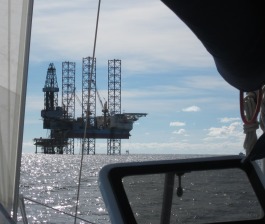 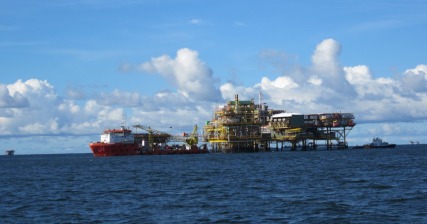 Oil rig and tenders off Labuan

Ben, the skipper, has been on the foredeck raising the anchor, but comes aft to take over the helm as Hugh and Duncan go forward to properly secure the anchor for sea.  Annoyingly, it has twisted backwards.   It’s a big, heavy Manson anchor with a roll bar and the only way to right it is drop it a bit and, when there’s a bit of length in the chain, carefully twist it over and bring it up again.  However, we are now moving at some speed and doing this manoeuvre while moving in a seaway gives pause for thought.  If we release the chain brake to allow a couple of metres of chain to run out, Hugh and Duncan think that there is a very real risk that the momentum of the chain could be too quick and powerful to be stopped before it re-enters the sea – and we will have inadvertently anchored, in a reverse dead-stop, a 48 foot metal catamaran travelling at eight knots.  This is an event not to be contemplated.  Hugh decides to inform the skipper that the anchor is actually secured but that it is turned backwards, and that it can be righted at our next anchorage.

The skipper, however, is not satisfied with this.  He says that he wants it righted now.  The skipper puts the boat on autopilot and goes forward to right it.  Hugh is convinced that this is an unnecessarily risky manoeuvre.  He again suggests waiting until we are at anchor and not risk losing control if the chain brake is eased and the weight, momentum and speed is too great (as Hugh believes is quite possible).  However the skipper is confident that he can manage the matter and directs Hugh to release the brake.  With the tension mounting, Hugh makes a further calm and deliberate attempt to try to persuade the skipper to do this later.  The skipper is determined.  He immediately proceeds to lift and also twist the chain and anchor while also keeping his balance.  This is not easy (no one is as young and fit as they were).

The skipper is now facing forward standing over the anchor as, with all available brute force, he struggles to lift the chain and anchor.  However, he also unknowingly pulls the chain out of the capstan’s retaining jaws.  As the chain starts to run uncontrollably it now clamps itself onto the rope gypsy along with several of Hugh’s fingers as Hugh is trying to stop the anchor chain from fully running out and causing Candeux to pitch pole over its own anchor.  Not a good result.  Hugh cries out very loudly, first in pain (as he pushes though the pain barrier to get the chain back in capstan’s teeth), and then in frustration, as he says to the skipper: I am not prepared to do this now and immediately repeats, just for clarity and emphasis: I am NOT prepared to do this now.   The skipper gets the point and is genuinely concerned for Hugh’s hand.  Fortunately, Hugh has an historical attachment to his fingers which he was disinclined to sever (ha, ha!) and has managed to drag them free (with temporary damage) and secure the chain.  A close thing.  And, as luck would have it in all the kerfuffle, it transpires that the anchor, flailing about in the ether at the end of the skipper’s arms has managed to turn itself about and so is inadvertently stowed in the usual fashion.

This was very good luck, in lots of ways.  But luck is not to be relied upon.  The actions of any individual on a boat always directly affects others.  The question is not, can it be done? but should it be done?

Sailing has pleasures and risks.  The risks are real and pleasures unique.  But it is a team activity like few others, and a boat is only as good as its team, not its members. 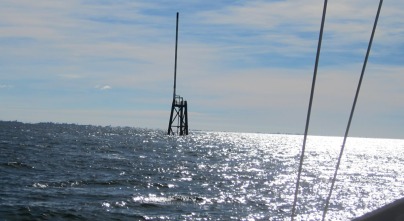 Having avoided pitchpoling Candeux on its own anchor, the next challenge was to avoid a myriad unlit poles which were part of the oil ad gas industry

Duncan admiring the oil and gas rigs that dominatged the seascape