Hugh and Ben finally pick up their third man, Duncan, on their run from the Philippines to Thailand via Malaysia in the new aluminium Mumby catamaran Candeux.

As usual, it is not without its dramas.

The run from the nature reserve of Pulau Tiga to Labuan Island just off the east coast of Malaysian Borneo is an easy motor-sail, seeing us arrive at around 1600hrs.  Labuan is the capital of Sabah State and a major port.  There is plenty of commercial shipping but our entry is easy and we anchor just off the north wall of the marina which, like numerous marinas in Malaysia, is falling apart.  This one has been closed for renovation, but it doesn’t look like there’s much is going on.

Labuan is also a substantial town and harbour.  The place is festooned with ferries, water taxis and work vessels – all servicing the oil and gas industry.  In fact, the bay impresses with the number of very large oil and gas tugs.  There are about 40 of them (no, not joking), almost completely covering the main bay.  These are serious industrial vessels.  If each was worth a conservative $25 million (did I say they were big), then there’s a billion dollars idle at anchor at our stern. 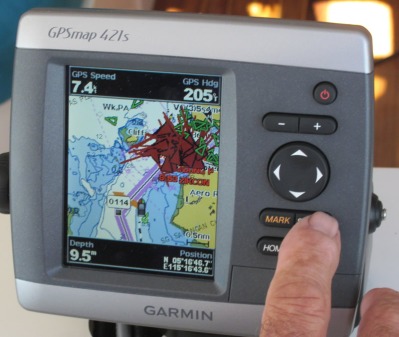 The oil and gas vessels lit up the bay at night

Labuan is also where we pick up our third crew-member, Duncan.  He’s an old sailing mate of Hugh’s who is now based in Newcastle. He’s still in full time work, so hasn’t been able to be as free with his time as his shipmates. He is currently in transit to join Candeux tomorrow.

With provisioning and exploring in mind, Ben and Hugh drop the dinghy in and head into the derelict marina to make landfall and get into town.  There’s not a lot of immediate interest but there are some shops, a mall or two and enough service industries to meet our various needs – but, of course, no liferaft.  Still, we catch a good curry, score some beer and food and then head back to Candeux.

The next day, Duncan at last arrives via the ferry from the Borneo mainland via Brunei.  He has been travelling a long while to get to us.  He began on Friday and arrived on Sunday (Newcastle, Sydney, Melbourne, Brunei, then Labuan) and since getting on the Brunei Airlines plane in Melbourne (Muslim airline and country – no alcohol ), he has not had a real drink in ages.  And Duncan likes a drink.  He is bloody gasping.  We immediately sit him down to cold beers and life is, once again, rich.

Enjoying a cold beverage at the Labuan marina restaurant

The defunct Labuan marina lies beyond the wall. The restaurant is in the red-roofed building to the right.

We now need to decide on our route across the South China Sea from Borneo to the Malaysian Peninsula and then Phuket in Thailand. We also need to complete our provisioning and Duncan is very keen to see the site of the Japanese surrender to the Allied forces in World War II.  We decide to spend one more day at Labuan then depart on Tuesday.

We were initially thinking of making a direct 700nm sail to Johor Baru on the southern tip of the Malay Peninsula across from Singapore.  However, we decide that we will experience more and have better sailing legs if we follow the Borneo coast down to Kuching and then head west to the Singapore Straits (about 350nm, instead 700nm) across the South China Sea.

It’s Duncan’s first full day so we hire a car to visit Surrender Point where Australia accepted the surrender of the Japanese forces in Southeast Asia on September 10, 1945.  Before retiring from the Australian Army and moving into IT, Duncan was a member of the Survey Corps in the Australian Army and it was this corps which drafted the instrument of surrender that the Japanese signed on Labuan.  It is interesting to note the Surrender Point commemoration site is overwhelmed by the large Japanese funded Peace Park, which has a number of large commemorative plaques extolling peace and harmony.  The irony, if not the effort to rewrite history, is striking.  The Japanese were the aggressors and the defeated, but present themselves as peace makers. We also come across a group of local youths using Surrender Point and the Peace Park as a hang-out, racing their motorbikes along the avenues.  It is striking, in a different way, that such sorrow and loss has so little meaning to those whose inheritance it is.

The memorial at Surrender Point marked an important point in history. 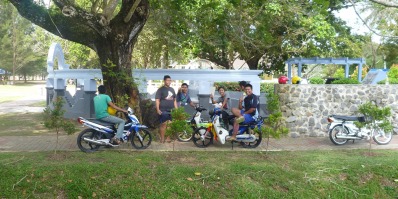 A local pilot guide we have been using suggests that the Indian restaurant at the defunct marina is good.  So, earlier in the day, we booked dinner at what is really a very modest restaurant: more a family kitchen with a couple of tables and chairs.  And now, sitting on Candeux, it is pouring with rain.  We are undecided.  It’s dark, very windy, wet, lightning (yes, it’s a storm), the seas are very choppy, the inflatable has a leak, the outboard is unreliable, the length of the tender anchor warp is less than the depth (in case the outboard dies Hugh does not want to drift out of the bay to who knows where), we have no means of communicating with anyone useful if we need help, and after a meal with booze we can’t afford any mistakes.  Whose idea was this?  What are we doing?

We are conscious that the restaurant staff/family are very nice and probably opening just for us (defunct marina, only boaties about).  We dress for dinner in our wet weather jackets and shorts and hope for the best.

We get to the restauran’, very wet (but not yet drowned, that’s probably for after dinner), and there is food and beer.  Alright!  Unfortunately, the meal proves a rather dull affair and, as expected, we are the only guests.

Unfortunately, we can also see from the restaurant that Candeux is being sailed all over its anchor by the wind.  This is worrying.  If it drags we probably can’t get to it in time (even if we survive the dinghy ride) to do anything before it smashes against the cement marina walls, the beach or voyages out into the crowded harbour all on its own.  Ben expresses his confidence in the anchor and the holding so, given that it’s the skipper’s call and the fact that Hugh and Duncan are actually on dry (ish) land watching Candeux figure skate, we opt for another beer and watch the show.

Finally the moment arrives, however.  We have to head back to Candeux.  The wind has dropped a bit, but it’s still raining.  It is at this point that Hugh realizes that all his newly washed clothes have been sitting in the rain.  Damn.  That’s put (another) dampener on events.  This circumstance is only compounded by the fact that the dinghy is almost sunk with all the water in it.  At this stage, having enjoyed their meals and drinks, Ben and Duncan are not that fit for purpose, so Hugh (stripping to his swimming costume) has to jump in to bail-out the dinghy.  But first, (having no actual bailer in the dinghy!) we have to improvise one by asking the restaurant for a spare container.  It feels like an omen.  Still, the task finally gets done, with an array of helpful observations: “Mate, exercise the bailer, the rain’s winning”, as Hugh slips and falls within the dinghy. “Stop playing around, we’re getting wet out here”.  We now only have to brave the turbulent cross seas back to the boat in the pitch dark, with no lights, fairly drunk, no life jackets, in a leaking dinghy with an unreliable outboard.  Oh yes, and in a fit of bailing enthusiasm, Hugh has thrown the bailer overboard.  Oh dear.  Curry and poppadoms wasn’t really what Hugh had planned for his last meal in this life…..

Hugh tackles the swamped dinghy with an improvised bailer

A street market in Labuan

Anyway, we are lucky.  Candeux’s anchor has held.  We didn’t sink, get toasted by lightning or drown.  All rather more good luck than planning.  But happily, Hugh discovers that even though the bags carrying Hugh’s clothes are thoroughly wet, the laundromat has actually packed the washing itself in plastic bags.  Joy.  It’s dry, even if Hugh is not.

In hindsight, we must have been mad.