After yet more running repairs on Candeux, skipper Ben and first mate Hugh reckon they are ready to venture further down the west coast of Borneo.

The next leg is a relatively short hop – the 40nm from Teluk Usukan to Kota Kinabalu where we plan to stop for a couple of days to obtain fuel and re-provision.

We also hope to get the slow leak in the dinghy repaired.  Ben looks upon the dinghy as our “liferaft”, if the worst should occur.  Hugh considers a leaking dinghy with no safety gear or sun protection either an inexact appreciation of risk or an exercise in unjustified optimism.  Hugh is thus keen to get a real four-person liferaft before Duncan joins Candeux in Labuan, and before we sail the three and a half day crossing of the South China Sea to Singapore.

The wind is very light – about five knots from the east – when we set out but it soon swings into the south so that we are motor-sailing … as usual.

Around 1030hrs we identify an approaching storm front.  The wind promptly swings to dead on the bow.  We drop the sails and start up the second engine.  At 1100hrs the wind picks-up to about 15 knots and the rain starts.  Another wet day of sailing.  Candeux is handling the short, choppy seas well (swell from the NW, waves from SW). Swell and waves together are less than a metre, so there is little slamming but some hobby-horsing.

Wet. Say what. There is so much rain that we can hardly see the bow of the boat.  We are now, of course, approaching Kota Kinabalu which is a major shipping port along the Malaysian Sabah coast, so it would be good to have some visibility. Still, we have an AIS receiver so at least we have a good idea which other AIS-equipped vessels are out in the rain, even if they don’t know that we are there too.  As for those numerous non-AIS vessels …… keep a good look out…… and yes, just when you least expect it, a large naval vessel materialises from the rain mist from which we have just emerged, about 200m to starboard.  That could have been nasty. 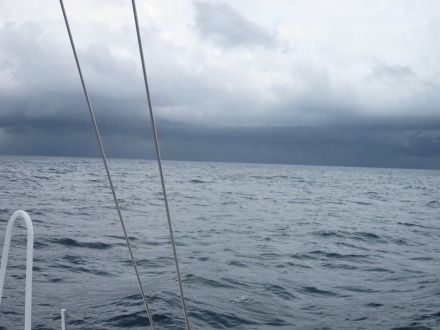 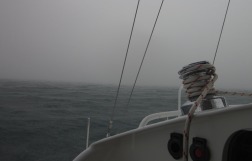 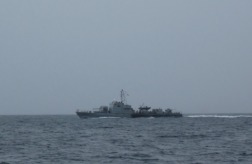 The Malaysian navy appears out of the mist

We stay on the alert, the rain eases a bit and we push on with our plan to come up to Kota Kinabalu from the south initially and then turn to starboard for the run in to anchor off the Kota Kinabalu Yacht Club.  There are numerous unused cables in the area, so we will have to watch that.

We carefully inch our way in to anchor off the Kota Kinabalu Yacht Club. It seems to shallow a fair way out so, conscious of our penchant for groundings, we drop the anchor in good water and decide that we’ll just give the dinghy and outboard a good workout (assuming the former stays sufficiently inflated, and the latter starts (always a bit temperamental).

The rain does not let up so we decide to make the best of it and take a shower on deck.  Hugh is a bit of an au naturale enthusiast but he is aware that we can be seen by lots of people on shore, including anyone looking out the windows at the Yacht Club, and decides, contrary to usual practice, to wear his swimming costume.  It is not that Hugh is especially modest, it is more that he thinks the locals may think a naked soapy Caucasian is not quite the done thing. Hugh is just about finished a very refreshing shower when Ben appears stark naked, whooping and waving his shampoo.  Hugh thinks that maybe Ben has been at sea a bit too long and the wild man inside him is finally coming out. This is OK as long as no one at the Club is watching and they refuse us entry and deny us cold beers. Then I’d be the wild man.

Eventually we brave the short, steep swell and rain to get ashore to the yacht club.  We get a bit wet but not too much.   The place is large but largely deserted.  According to the only man in the bar, Albert (who initially introduces himself a Nick – it is not clear why) the club was founded in 1954, the year of Hugh’s birth.  Surely that’s a good sign.  It is all heavily wood paneled, but looks rather tired, a bit like Hugh at present.  Still, there is cold beer on tap and we relax.  The next challenge is dinner.  It is still raining and wet but we find a covered, open air bar on the beach front which serves food, so we make another good landfall and count ourselves lucky. 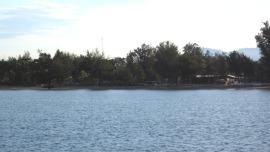 The Kota Kinabalu Yacht Club from the anchorage 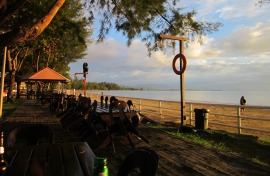 A busy day at the Kota Kinabalu Yacht Club? 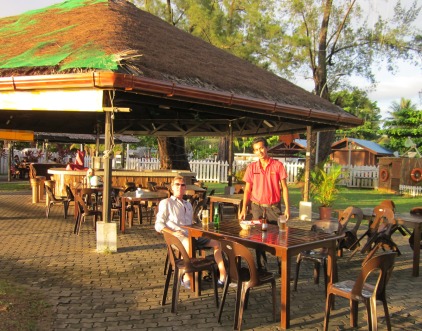 We had the Kota Kinabalu Yacht Club almost to ourselves

The following day the rain has stopped but it is still overcast.  We set off for the town proper to do some provisioning (a ceaseless task).  We try to obtain a liferaft and get some dinghy repairs, all to no avail.  We do, however,  manage to get some bolt cutters, and the bits and pieces that Hugh needs to rig up an emergency steering system to allow us to steer with just one rudder, should the need arise (again).  Hugh likes to be prepared.  Hugh also thinks that he has a fully functioning appreciation of risk, exercises a measured optimism and assumes that what can go wrong, will go wrong….. 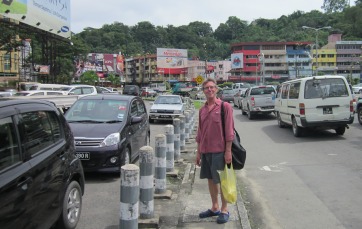 The endless task of provisioning – this time in downtown Kota Kinabalu 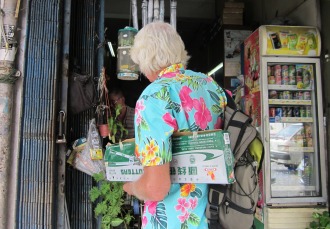