The voyage from the Philippines to Thailand via Malaysia has skipper Ben and first mate Hugh on Ben’s 48 foot aluminium catamaran, Candeux. The next leg is a 70nm run from Brookes Point on Palawan Island to Balabac town on Balabac Island.

Another day of 0430 wake-ups for Ben and Hugh for the run to Balabac at the bottom of the Palawan group.

Balabac town is the main centre on the Island and also a Philippine Coast Guard location. We have high hopes that this will be a trouble free day.

The wind is again light (5-10 knots) and variable, so we are motor-sailing, again. We are making good time – about 7.5 knots with both engines running – when, at last, some wind comes in. This is good. Ben decides that we should put up the big drifter. Ben has only had it up once before, so we will be discovering as we go. Hmmmm. All goes well. Up she goes with the sail coming out of the sock. No problem. It fills for a while, but soon collapses as the wind shifts. We decide it now needs to be on the port side to get a better angle to the altered wind. We attach another sheet, bring the boat around slightly and the drifter comes over. Nice.

Scooting along past perfect tropical islands with the drifter up 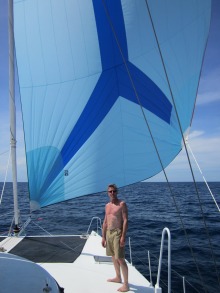 Hugh enjoying the downwind sail, blissfully unaware of what is coming next

However, in what seems mere moments, we can see a front coming our way. Well that explains the odd wind shift, but, it looks a long way off. Ben seems happy with our current position, so Hugh goes below to do the washing up. Some things never change. Hugh has barely got the suds up when suddenly, the wind hits. Up on deck, the drifter (a big sail) is having a conniption and starts flogging and flailing about. Hugh, hearing the not small ruckus, rushes topsides. However, Ben is right on it and is trying to sheet in the drifter to get it under control. While admiring Ben’s commitment to tame the beast, Hugh thinks that the beast should actually be in the bag. Hugh says so. Ben thinks for a second. Yeah.  We set about dropping it. Nothing happens. Oh, bugger. The wind is now howling, rain is imminent, the hatches are all open, nothing is properly stowed and the blue Goliath is flailing around all over the foredeck, lashing and snapping about with some now ugly looking sheets. Ben, however, is fearless. He is grappling, tripping, ducking and weaving trying to get the bastard down. Hugh hopes he doesn’t get knocked down or overboard. Ben persists however, and soon identifies the problem. The rigid plastic opening of the drifter sock, which is at the masthead, has been caught on the starboard side of the headsail furler (having failed to flip over when we gybed the drifter). This prevents it from sliding down over the sail and turning the sail into a manageable sausage. One thing, then another. We decide to tack the boat to try to bring the billowing drifter to the same side of the furler as the sock. A plan. Good. Unfortunately, this is not as easy as it sounds – acres of sail, howling winds, sheets all over the shop, tacking a big catamaran, a rising sense of chaos. Still, it works, with the aid of the engines, and we get it down. Calm returns.

In hindsight we could possibly have loosened the halyard which may have allowed the sock hoop to be pulled over the furler to the same side as the drifter. Equally, we could have let go the halyard completely and tried to capture the drifter by hand as it dropped. We also reflect on the wisdom of tacking the drifter in the first place. There could be a reason why it only came with one sheet – if it needs to be swapped over, drop it, re-lead the sheet and then hoist on the new side. Ah, well. We’ll know next time.

Once we get the drifter down, the squall, as if to mock us, passes on. After all this we are approaching our destination, Calandorang Bay in which lies Balabac town. The approach is easy and as we close in we can see a large grey Coast Guard vessel anchored within. We try to call on VHF to make ourselves known but there’s no reply. Still, as we pass by Hugh waves and they wave back, so we assume that’s sorted. We won’t be blown out of the water or boarded by commandos wielding machines guns (at least, not today…..). We have identified the anchorage off the town centre and are slowly heading towards it.

Coastline in the southern Palawan islands

Approaching Babalac with the squall heading back our way

Ben checking out our route into Babalac town in Calandorang Bay

Ben is now busy preparing the anchor and Hugh is on the helm. Things are going fine, although Hugh thinks that the steering feels very stiff. This is perhaps not surprising after the crunching it took on the rocks at Brookes Point, our last anchorage. But oddly, there’s also a strange sound of metal moving about in the steering bulkhead. Before you can blink and think “please not more”, there is the sound of something falling. Then “Oh, you’ve got to be joking. Ben. We have lost the steering again.” The last time this happened at Manucan Island we nearly lost the boat. Ben comes rushing back from preparing the anchor at the bow and goes straight to the bulkhead locker, suspecting, not unreasonably, that, as at Manucan Island, the steering chain has again come off the cog; or that the bent turnbuckle, (not yet able to be replaced) has broken. Bugger. No, not those. It’s a whole new problem. Of course.

Meanwhile we have begun to just drift about with the light now fading. To our starboard is a partly submerged wreck and to port the anchorage with several boats. Fortunately Candeux as twin engines, so that by adjusting the throttle, Hugh can, as at Brookes Point, maintain some steerage while Ben is lost within the locker (it’s almost a second home}. Ben, who is really good at fixing stuff, finds that the keyway (a bit of metal the size of half a cigarette) has fallen out of the wheel shaft. That just should not happen. Anyway, in the fading light of an unknown anchorage, he now has to find it and somehow get it back in (assuming that, having just fallen out, it actually will go back in). Ben, with a torch, is now hard at it. He seems to be completely inside the locker now (how did he do that?). He finds it. Impossible. He slots it back into place. Miracle. We can steer again, but it’s yet another temporary fix which, since we don’t know why it fell out in the first place, might last mere seconds.

We anchor right where we are. It’s all too much – first a good thrashing from the monstrous drifter and then the miniscule keyway drops us in it. Thank goodness the most critical piece of technology on board has not failed us, yet. We raid the fridge and drown our frustrations, rather than ourselves, in cold beer. Bloody good.

The anchor down at last!