After escaping the Canberra heat and fly fiesta, Hugh arrives on Mactan Island in Cebu, the Philippines, to join sailing mate Ben, who has finally taken delivery of his new Mumby 48 foot aluminium catamaran, Candeux.

Ben loves a pun: two (deux) cans (hulls) and two people can… all they need is the can-do attitude.

The plan is to sail Candeux to Phuket in Thailand, picking up another mate, Duncan, on the way in Brunei. The route is from Cebu to Palawan Island in the Philippines, on to Malaysia (Borneo), divert to Brunei (for Duncan) then cross to the Malay Peninsula and sail up the west side to Phuket in Thailand.

Ben decides he just has to escape from Mactan Island’s stinking marina. After a celebratory dinner, we up anchor and are off. It should be a hoot. Funny about sailing though. It isn’t always what it seems.

The first leg is a short run to Tagbilaran on Bohol Island which recently experienced a significant earthquake. Candeux performs fine; but that engine is just not right. Still, we arrive at 1500hrs with no problems. In our desperation to escape Mactan, we didn’t really provision as well as we might have. We are going to need more stuff (meaning, beer). Hugh runs Ben ashore for shopping, with a plan to collect him in half hour. Half an hour passes. No Ben, no mobile call. Hmmm. Hugh goes ashore. The jetty is a little night spot and market all to itself. The young and amorous, families and hawkers are all here hanging out, and everyone is maxing-out on their mobiles.

Not to be outshone, Hugh gets out his mobile and calls Ben, numerous times. No answer. Oh, oh. Dead battery, no service? Lost, robbed, car accident, murdered, sold into the pensioner slave trade? As much as there is a certain piquant pleasure in panicking, Hugh gives it a little while. Ben is a big boy; he’s travelled the world. Relax. Yes! Out of the gloom, a striding shock of silver hair. Well, that’s a relief.  There will be dinner, and no need to do the rounds of police stations and hospitals.

The next morning, we make a 5.30am start a for a 60nm voyage to Port Bonbonon on the south west tip of Negros Island. The winds are light from the SW. The direction we are going, of course. Our ETA is 1400hrs.

We actually arrive at 1500hrs, not too bad. The entry looks a little tricky, via a fairly narrow channel along the coast on the southern approach. There is a shallow reef and nature reserve to port which is marked by small white buoys. Ben is on the helm and we are well positioned mid channel. However, for no particularly good reason, Ben seems to have developed a need to check the channel boundaries and water depth, and to do this with the starboard rudder. Whack. Yes, that will be the reef. Good. At least we know where that is. Fortunately, the rudders have a stainless steel stock, external stainless steering arm and aluminium rudder, so they’re pretty tough and there’s a sacrificial wood block in the rudder box if we hit hard. Still…

Port Bonbonon is a sheltered, rather idyllic, small jungle port in a winding river. We motor past an array of local fishing boats to drop anchor among a surprisingly numerous collection of other yachts in various states of disrepair. We are quickly greeted by Arlene and her husband Boy who arrive at our stern in their traditional narrow wooden outrigger. They own one of the three local restaurants/bars – bamboo and thatched pole arrangement suspended over the water. Food, beer (cold) and fraternity. Perfect. A quick tidy-up and we are off.

As we clamber up the ladder, we see one other Caucasian in shorts and no shirt at a wood table with beer in hand. He introduces himself as “Rocket”. Rocket (who doesn’t seem to have another name) is the archetypical Australian: the classic laconic drawl (for a minute Hugh thinks it’s a joke to welcome the new Australian arrivals) and a sort of sinewy, leathery, tanned body. He’s a friendly bugger, as you’d expect, and we sit down and order beers ourselves. Rocket has come from Darwin and is a welder by trade. He arrived 5 months ago with his son (since flown back) and is now ensconced with his Filipino girlfriend. He’s on a 35 year old Crowther trimaran which is not that big – luckily, neither is he.

After a few beers, Arlene comes to take our order. We opt for omelette with vegetables and Arlene sets off to make it all there and then (we can hear everything being chopped and cooked behind the bamboo screen).

As we relax, a few other locals drop in and chat with Boy, who seems pretty happy to watch Arlene do all the work. He is obviously the customer relations.

Next to appear is Glen, a 6’2″ American. He’s sharp, but easily in his late 70s. As we watch him arrive and climb the shambolic ladder to the elevated bamboo jetty, it is not entirely certain that he will actually get up. Rocket casually observes that Glen has previously fallen through the slatted bamboo walkway. Fortunately, a young Filipino mother with a three year old boy goes down to help and they all then return to Arlene’s. Glen’s family, for such it is, settles back down while he joins us for beer. Glen seems to have been sailing quite a while and, as he says, he is really too old now. He is planning to sell his yacht and focus on getting the 3 year old, George, into a good school in the US, New Zealand or Australia. It appears that the father of George died (it is not clear how) and Glen has taken over the orphaned family. It all seems a little sad, but the fact is that Glen is happy and energetic. George now has a father and they are all better off than before. Glen is escaping from loneliness and isolation; and George and his mother, from poverty. For his part, Ben is making his escape from the Philippines and the life of everyday work and responsibilities. We each, on our voyages, make our own escapes. 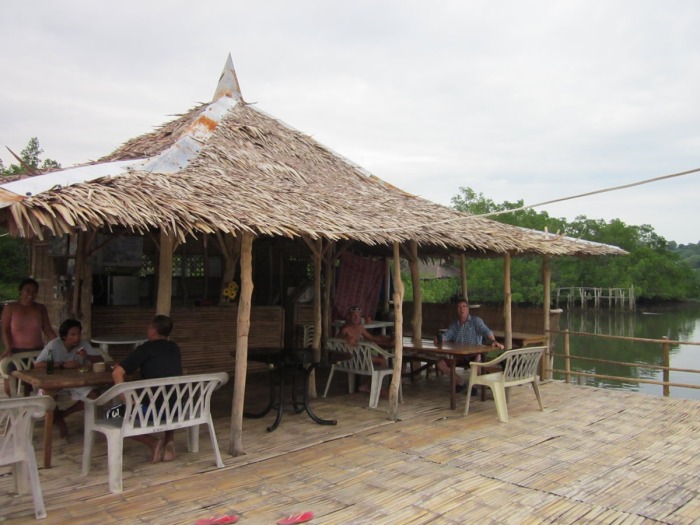 Next morning we are on our way to Point Catmon, further north on Negros Island. Port Bonbonon has left us with a feeling of unreality – an isolated river village with enclosing jungle and an odd collection of people who have escaped and are escaping.

It is not clear whether or not Ben is suffering from this same sense of isolated unreality, but something is not quite right. Maybe Ben is feeling the need for some solid reality. Hugh is very aware that reality, in the form of a rock shelf, is just to port. Hugh senses that the boat is edging too close to the shelf. “Ben…” Whack. Yes. We have hit the rock shelf with the port rudder. That’s reality all right. I hope Ben has not gone troppo so early in the voyage. Maybe Ben was just checking the depth with the port rudder because it worked so well with the starboard rudder on the way in. Yep. Just as good – a big loud bang sound. At least the reef hasn’t moved. Or maybe Ben just needed a bit of rock solid certainty amongst the Bonbonon unreality. Don’t we all.